Flea market and planning in Ams 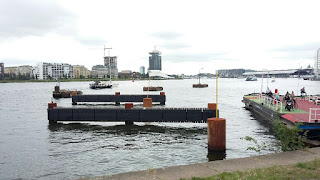 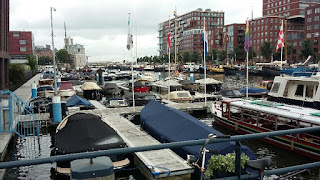 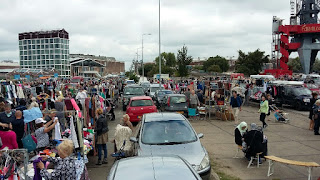 We spent a large part of the day with our friend Peter in the monthly flea market just along from the marina at IJ Hallen, or rather outside it.  Apparently the largest in Europe, certainly more than 500 stalls. (pic) Nic bought a few little presents for Ilona and Katherine (birthdays soon), and a rather nice captain's hat for costume purposes to go with his navy blazer (at home) - all we need now is an invitation to a fancy dress party. Lesley got some clothes for €2 or 3 a piece, Hilfiger no less. Peter found a rare bakelite vase to add to his enormous collection (possibly second largest in Europe).

When I'd had enough (long before them) I caught the free ferry over to Houthaven and talked to a lock keeper about the night convoy that we have to use to go south through the canalks of Amsterdam. I know exactly how we get started now and we can go over early while it's light which removes the stress. We go through the first bridge on demand before 6pm (that's best), or between 10 & 11pm, and tie up before the railway bridge and listen on VHF 69. The convoy is free now. Hooray. I'm not sure any of the leaflets had this detail.

I then walked through some lovely quiet backstreets in the Westerpark area and had a look at the Westerdok which is inside some lifting bridges but is in principle somewhere we could have berthed.  There was only one yacht in there, it was almost full of barges (liveaboards) and motor boats (which don't need bridges lifting). (pic)

I just missed a ferry back and they are every 20 minutes so was forced to have a coffee and apricot flapjack by the waterside looking down towards Centraal. (pic)

Living in our cottage in the city, we have not been very focused on the weather other than whether (word play intended) to take a coat (we always have). There is some sign that the incessant strong winds and showers are giving way to a more settled period, to coincide with our journey across the country. (As I write this, the rain is suddenly pouring down on the cabin roof.) Poor SIRENA IV, her sails probably won't be unfurled until we're south of Rotterdam - unless we sail a meer just for the hell of it.

We love Amsterdam in all its wateryness, with more bicycles than cars and no trucks or even white vans - who knew how lovely it would be to go around a city and not see a white van.  The buses and trams are splendid. The people are lovely.We could happily spend another week here, however the plan to reach home by 3 Sep requires that we start heading south, giving ourselves some time to enjoy the polder (countryside).